The story behind the Gunnerus Award

The term “sustainable development” is – worldwide – forever linked to the name of Gro Harlem Brundtland. This places a special responsibility on Norway; to be a driving force in the world in the environmental field. The challenge is to find new scientific insights and to make the necessary political decisions so as to steer the development in an environmentally sustainable direction, both locally and internationally.

From 1984, Norway has had a special place in the world’s environmental awareness thanks to Ms Brundtland’s role as head of the UN World Commission on Environment and Development. The Commission’s mandate was to submit proposals for long-term strategies for environmentally-friendly development and cooperation between various industrial communities, and between developed countries and developing countries, taking into account man-made environmental impacts. The report “Our Common Future” was presented in 1987. In addition to the reports of the UN Climate Panel, the Brundtland Commission report can be characterized as the most important document created in the global struggle for a safe environment.

In many ways, Norway has been a pioneer in taking environmental challenges seriously. As early as in 1972, professor Olav Gjærevoll was appointed as Norway’s – and the world’s – first environmental protection minister. But ecology and the environment came onto the political agenda even earlier: Norway became a major polluter, due to its oil-producing activities. This imposed a particular responsibility on Norway. Environmental awareness has further intensified, and Norway has strengthened its research on sustainable development. Today, environmental responsibility and environmental challenges are at the top of the agenda for Norwegian companies, and companies integrate sustainable energy solutions into their strategies.

Nature management and conservation in Trondheim

The city of Trondheim has long standing traditions in nature conservation, originally associated with nature and nature management studies. These traditions are closely connected to the Royal Norwegian Society of Sciences and Letters (DKNVS), founded in 1760, and to the NTNU University Museum, originally founded by the Society. The Museum later became one of the cornerstones of the Norwegian University of Science and Technology (NTNU). 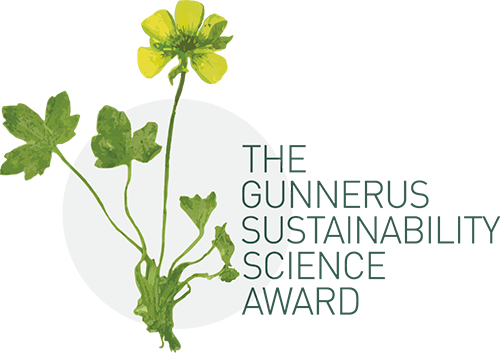 The Gunnerus Award symbol is based on a meadow buttercup from 1767 in Johan Ernst Gunnerus’ herbarium.

The Gunnerus Award in Sustainability Science is an international research prize of NOK 1 million. The Gunnerus Award was founded by the Royal Norwegian Society of Sciences and Letters (DKNVS) and awarded for the first time in 2012. From 2017, it has been jointly awarded every other year with Norwegian University of Science and Technology (NTNU).

The award honors outstanding scientific work for global sustainable development, and aims to promote research and strengthen the scientific basis of sustainability.